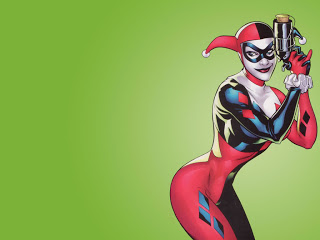 
Harley Quinn is a fictional character, a super villain in the DC Universe. The character was introduced on September 11, 1992, in Batman: The Animated Series and later adapted into DC Comics' Batman comic books, first appearing in The Batman Adventures #12 (September 1993). As suggested by her name (a play on the word "harlequin"), she is clad in the manner of a traditional harlequin jester. The character is a frequent accomplice/girlfriend of Batman's nemesis the Joker, and is also close to Poison Ivy, from whom she gained her immunity to poisons and toxins.

Add Your Comment
Add Your Caption
Shared By Whitewolf7597